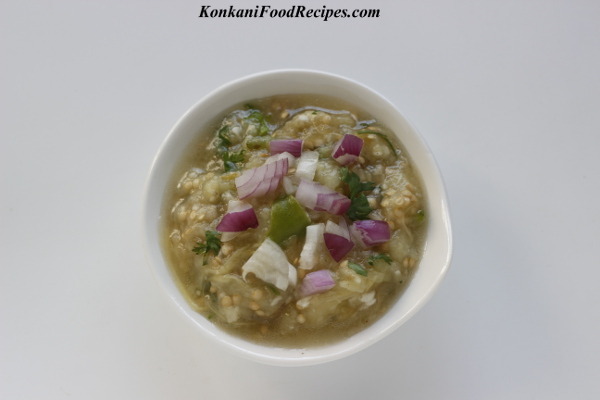 Brinjals from around Udupi regions called as gulla, matti gulla, perampalli gulla etc are charcoal roasted and are made into a spicy side dish called gulla bajji/gojju in Konkani. A great accompaniment with rice/pyej (congee).

Gulla gojju is usually prepared using matti gulla, a special type of eggplant/aubergine/brinjal from Mattu near Udupi. But you can also prepare this from any green brinjal (called as vaygan in Konkani). The smoked brinjal is mixed with green chillies, tamarind, fresh coriander and coconut oil to make a yummy side dish. 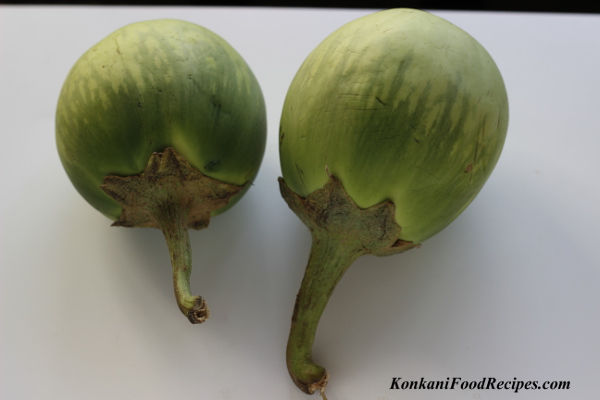 Traditionally the Brinjal/Eggplant/Aubergine/Badnekai/Vayangana/Gulla are roasted on charcoal and this side dish is served as an accompaniment with rice. You can roast the brinjals easily on gas, as its difficult to find charcoal these days.

Wash the brinjal. Do not remove the stem portion as it comes in handy while roasting the brinjal on the gas flame.

Wipe the brinjal dry, coat it with a thin layer of oil.

Keep a mesh on a medium flame and keep the brinjal on it. Roast it uniformly on all sides by turning it, rotating it every now and then until its cooked through on all sides. 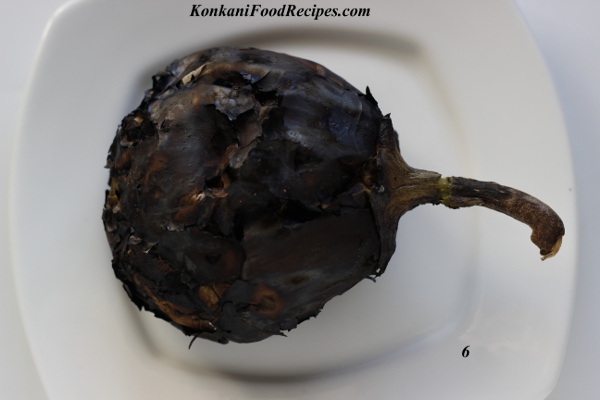 Once cooked keep the brinjal closed in a bowl. This resting period helps it cook on the inside.

Once the brinjals cooled completely, peel the brinjal. If the carbon particles stick to the outer portion of the eggplant, give it a wash.

Smash the peeled eggplant in a bowl. Smash the tamarind in the water it was soaked so that it gives out its pulp.

In another bowl add green chillies, salt and smash them a little.

Serve the gojju with a bowl of hot steaming rice.

Eat gojju with or without lots of coconut oil.

Eat gojju with or without chopped onions.

P.S: Instead of tamarind you can even use bimbal or hogplum/ambado for sourness. Cook them until soft using 1/2 cup water, smash well using hands once they are cooked and cooled and mix with cooked, cooled brinjal.

You can even add asafoetida to the gulla gojju instead of coconut oil.