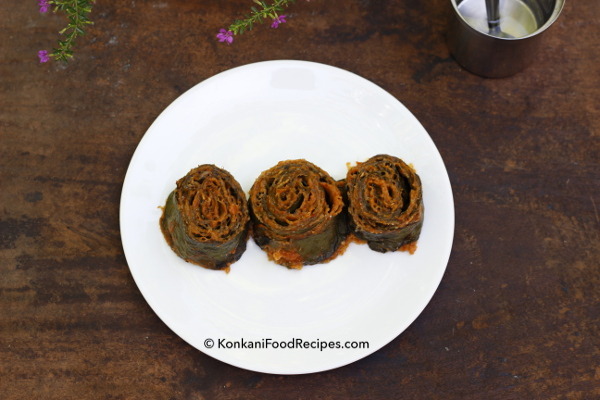 Konkani’s love for pathrado is undescribable. Pathrado is the King of Konkani cuisine. Konkanis go crazy the moment they see colocasia leaves. We have to make some delectable pathrado out of colocasia leaves and enjoy them steaming hot with loads of oil on top. :-) Well, that's true. I'm not exaggerating.

Pathrado is a Konkani cuisine delicacy. They are pinwheels prepared using colocasia leaves. Also called as pathrode in Kannada, alva panna pathrado in Konkani. A spicy batter is prepared by grinding rice, grated coconut, tamarind, and red chillies. This batter is smeared on colocasia leaves, which are then rolled, sliced and steamed. These steamed pathrode slices are then had with lots of coconut oil on top and are enjoyed while they are hot or cold. Steaming hot pathrode right out of the steamer with lots of coconut oil on top is absolute heaven!

Pathrode are made by steaming, shallow frying and even by deep frying colocasia leaves pinwheels. Here's a basic video on how to make pathrado.

Watch all about Pathrado making here:

And with the love for pathrado that we Konkanis have, we definitely don’t waste any leftovers. Leftover pathrode are turned into lip smacking dishes again. :-) We shallow fry pathrode slices with oil to make them crispy and enjoy them hot. We also add leftover pathrode into a spicy coconut curry and enjoy it with rice. This curry is called pathrode gashi in Konkani. We use leftover pathrode to make a tasty, spicy, sweet pathrode stir fry called as pathrode usli.

Pathrado is a must dish for festivals like Ganesh chaturthi, suthapunav (a festival celebrated on a full moon day once a year). In most Konkani homes pathrado is prepared atleast once a week.

Pathrode is prepared using different types/varieties of colocasia leaves. Here are certain tips you need to follow while you forage for colocasia leaves to make pathrode:

If spreading masala on leaves are the most difficult part for you, the above video should help:

1. Soak dosa/medium grained rice for atleast half an hour. After it's been soaked, wash and drain all the water.

3. Transfer the batter into a bowl and keep it aside. This ground rice batter is called 'pathrade peet' in Konkani, peet meaning batter in Konkani. 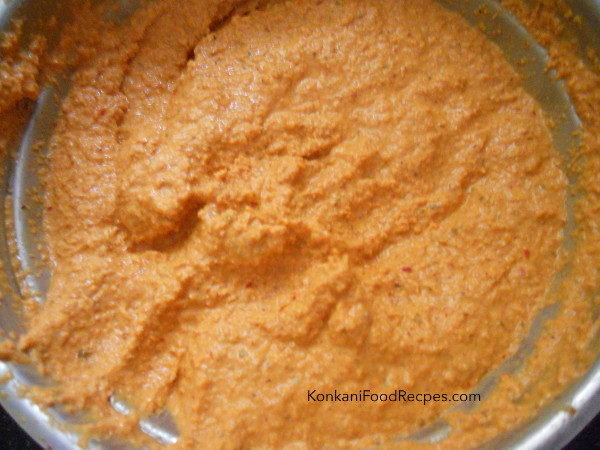 Tender colocasia leaves have very little developed veins and do not require deveining. When you use mature colocasia leaves make sure you devein the leaves completely to avoid itching/stinging sensation on cooking. 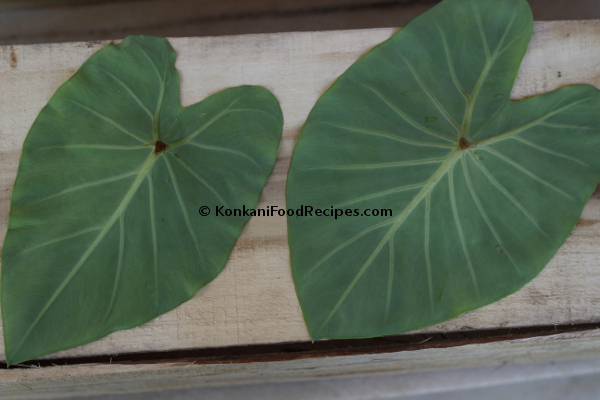 Mature leaves tend to have fully grown veins on the backside of the leaves. (June alva paan in Konkani, june meaning mature in Konkani) 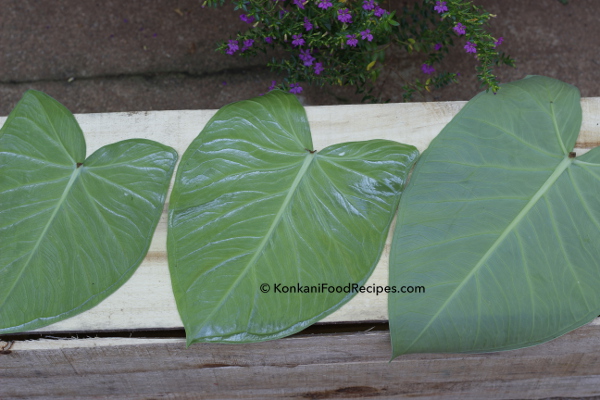 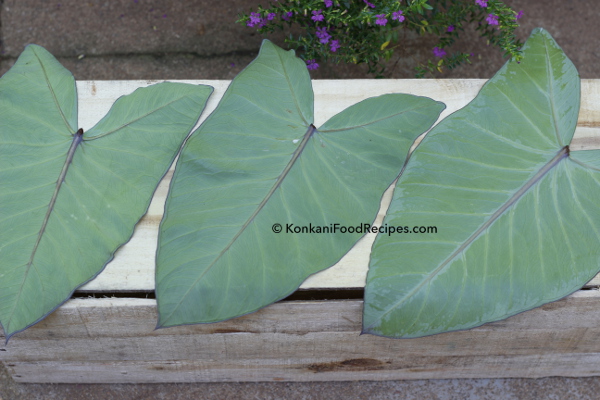 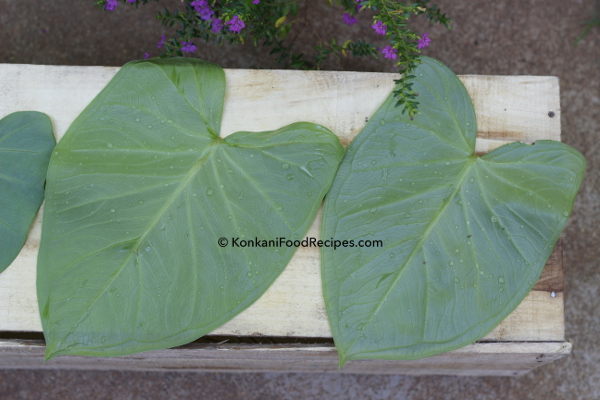 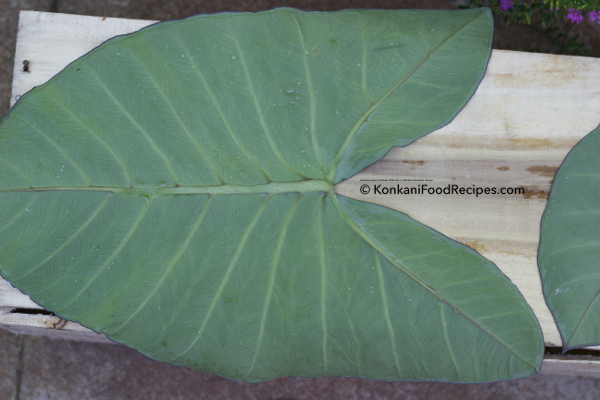 The process of deveining colocasia leaves is called as 'narb kadache' in Konkani, narb meaning veins and kadche means removing in Konkani.

5. Wash colocasia leaves well and keep them aside so that all the excess water drains out.

6. Once all the excess water drains out, start making a pinwheel - Alva panna lolo in Konkani. Watch how to make pinwheels - lolo

7. Keep the biggest leaf upside down on a clean surface. The pointed end of the leaf should be facing away from you. Apply a layer of ground masala uniformly on the back of the leaf. Using your fingers cover the entire leaf with a layer of masala.

This process of smearing a layer of ground rice batter over colocasia leaves is called as 'pathrado saroche' in Konkani, saroche meaning smearing in Konkani.

8. Keep another leaf on the first leaf and repeat till you have a stack of 8-10 leaves (depending on how thick/thin you want your pathrado rolls and slices to be) with a coating of masala on them. 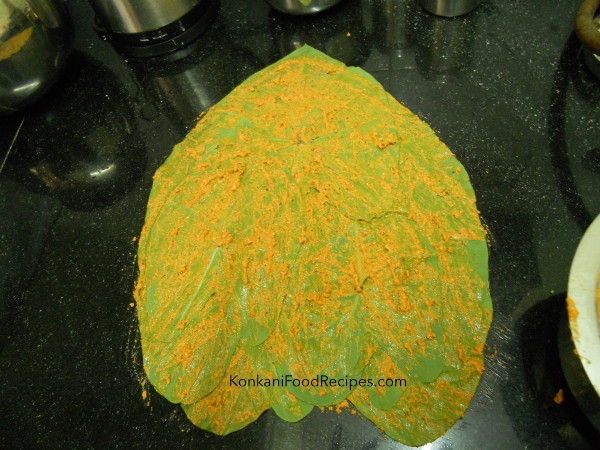 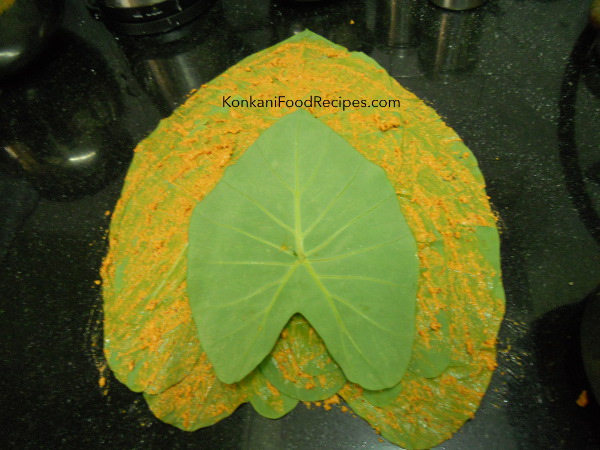 While making a pinwheel/pathrado, make sure you add enough batter all over the colocasia leaves. Lots of tamarind used in the rice batter helps breakdown calcium oxalate crystals present in colocasia leaves. 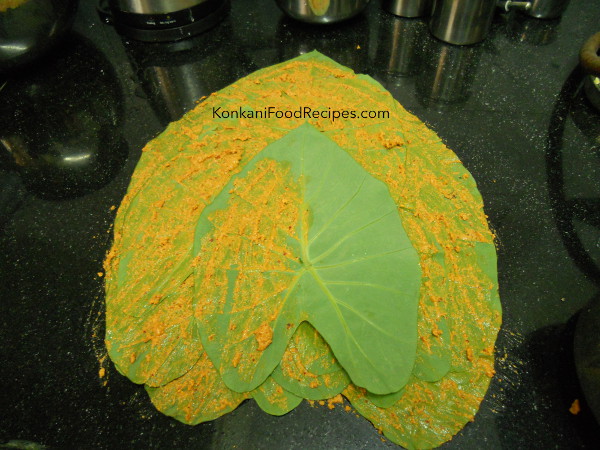 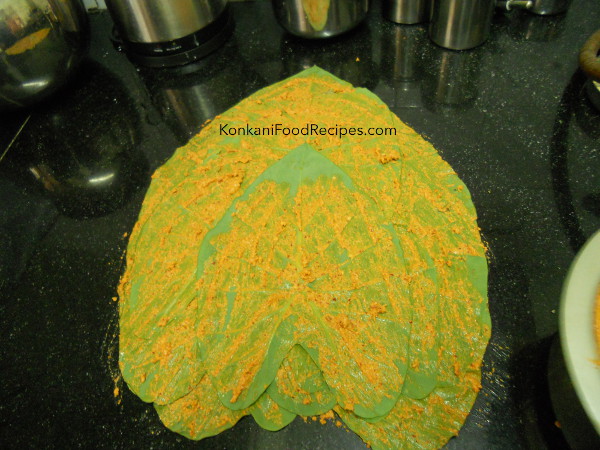 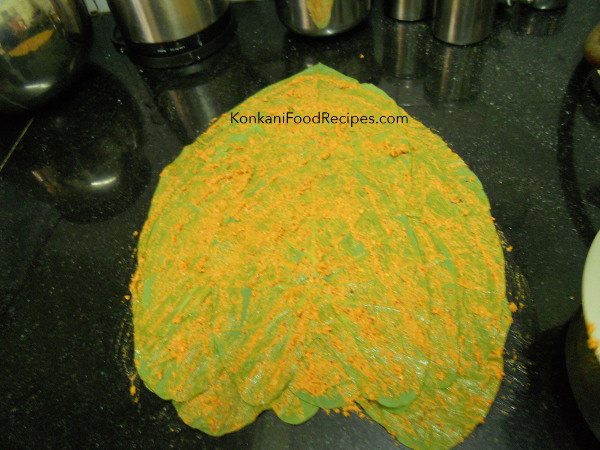 9. Size of colocasia leaves vary, try to distribute the leaves you place, uniformly on the biggest, lower leaf so that you get a uniform thickness pathrode roll later on.

10. Fold the stack of leaves on either sides as shown below and apply masala on them. 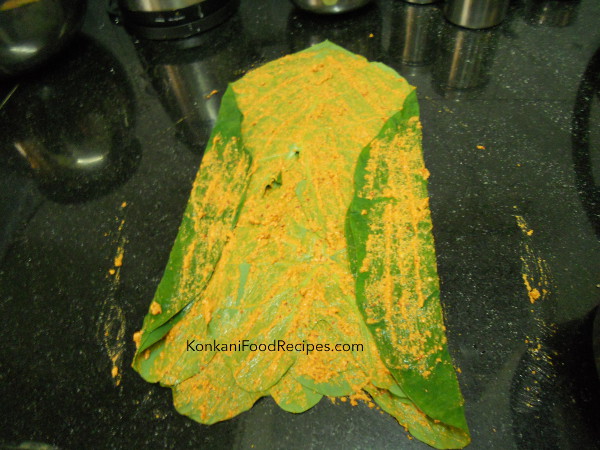 11. Start rolling it from one end. Start from your end and work towards top. Continue rolling till you reach the other end. 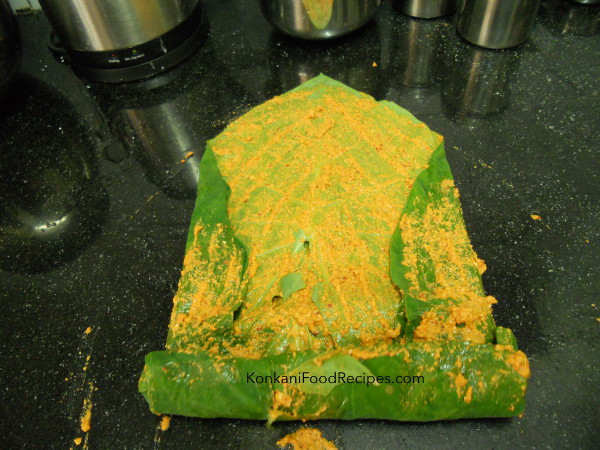 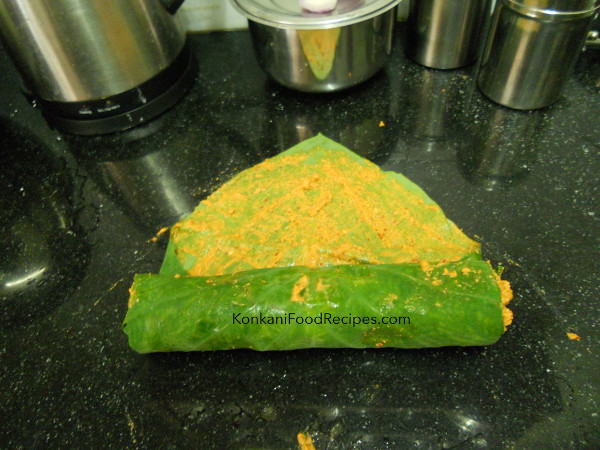 12. Roll them tightly or else while you cut them into slices, the layers/leaves tend to open up. 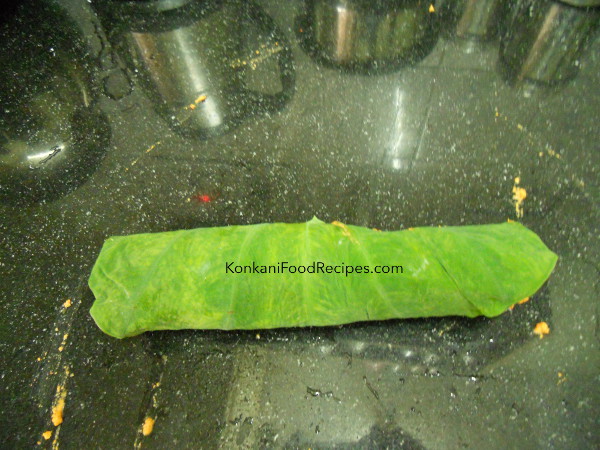 These rolls are called as 'pathrade lola' in Konkani.

13. Repeat the above smearing, rolling process with rest of the colocasia leaves. 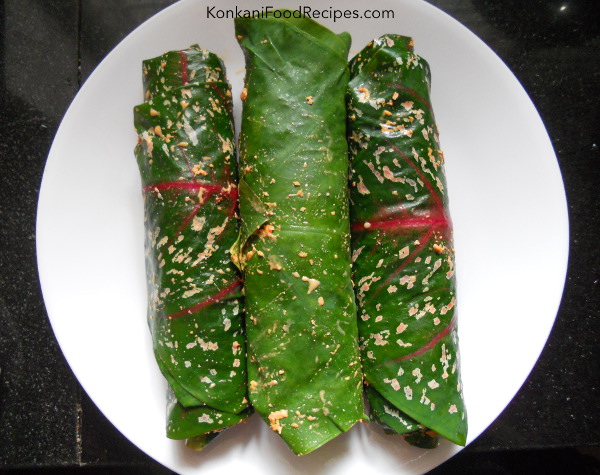 14. Meanwhile get a steamer going.

15. Chop each roll into thin slices of 1 - 2 inch thickness using a sharp knife. While cutting them into slices, hold the roll firmly with your hand and be careful not to press them hard with your fingers, to prevent the masala from oozing out. 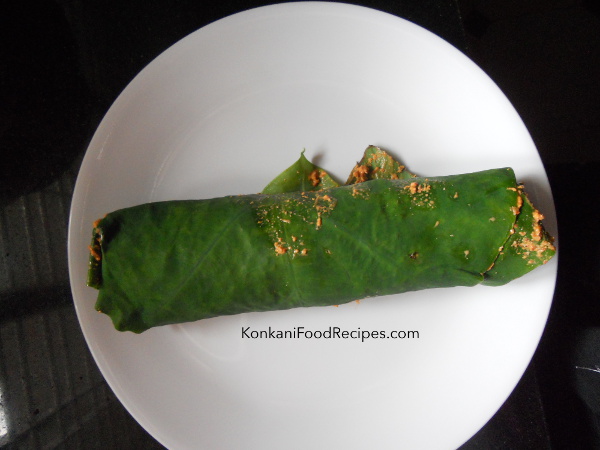 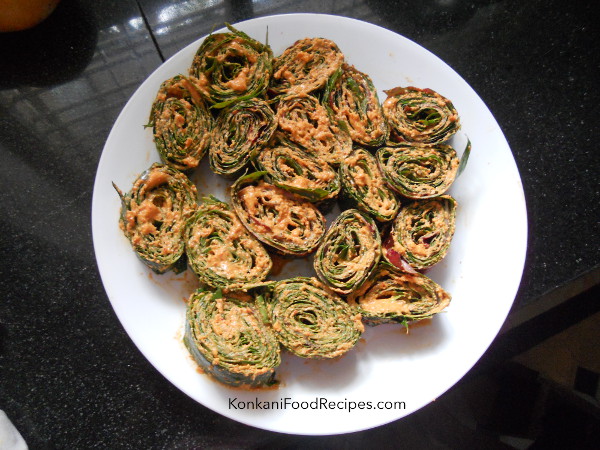 17. Steam them for 15 minutes on high flame and then for 30 minutes on medium to low flame. 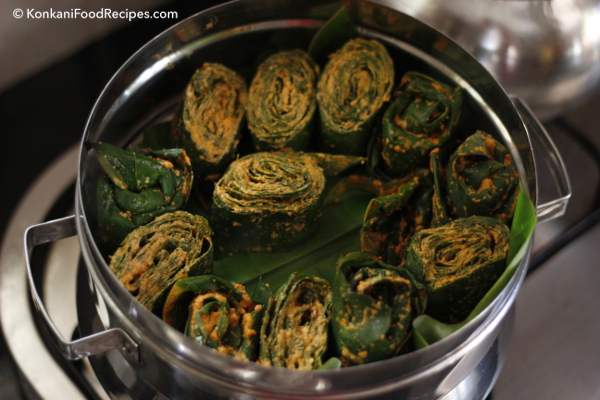 If you are looking to serve good looking, firm pinwheels, then leave the steamer little open for 10-15 minutes after steaming and then take out the pinwheels/pathrado.

Serve steaming hot pathrode with loads of coconut oil on top as a side dish for lunch.

In our house we enjoy steaming hot pathrode with lots of coconut oil as soon as they are steamed. They are super soft then. With time as they cool down, they tend to lose their softness.

At home we steam pathrode just in time for lunch/dinner, so that we can enjoy them soft, steaming hot with rice and dalithoy or with any other curry. :-) 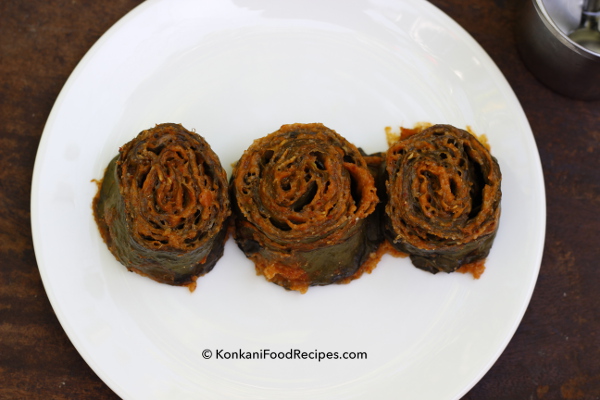 Any left over pathrados can be used in 3 ways:

1. Fry them on a frying pan with lots of oil until they get crisp. Serve them hot as a side dish for lunch, dinner.

Leftover pathrode tends to get a little hard on cooling. They lose their softness. On regfrigerating these leftover pathrode they get even more hard and lose their taste. Shallow frying them with oil with make them soft and fresh. Shallow frying them with lots of oil for a longer time will make these pathrode crispy. I just love those crisp pathrados with a heavenly taste of coconut oil.

2. You can make pathrade gashi with leftover pathrode. A delicious coconut curry with pieces of pathrode in it.

3. Or you can make a delicious, sweet, spicy stir fry out of leftover pathrado called as pathrade upakari/usli in Konkani.