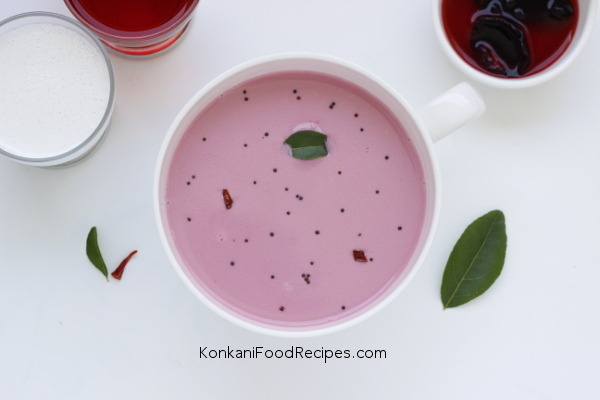 Famous through out the Konkan region - Maharastra, Goa, Karnataka is a delicious Konkan drink called as kokum kadhi or solkadhi. A Goan meal in incomplete without kokum kadhi. Goans drink kokum kadhi at the end of every meal, like we South Indians drink buttermilk. Solkadhi is a type of curry usually eaten with rice or is served as a drink after meals. It is made from coconut milk and kokum. Kokum kadhi is prepared using liquids extracted from fresh coconut - coconut milk and liquid extracted from kokum peels. The tanginess from kokum and the soothing flavour of coconut milk complement each other to make a well-balanced drink/curry that is loved by everyone. Solkadi is a refreshing and cooling Konkan drink with coconut milk as the base and with tanginess from kokum. Kokum kadhi served as a drink after every meal is also made without using coconut milk. You'll find recipe for this solkhadi/kokum khadi, also known as futi khadi here.

Kokum also known as Garcinia indica is a fruit bearing plant from the mangosteen family. The plant yields dark red colored fruit. They are amazing to eat with a sweet sour taste. The outer peel of the fruit is sun dried in large quantities and is sold as kokum. These dried kokum peels are used, when fresh kokum is not available throughout the year. After drying the peel gets blackish purple in color. These kokum peels are sour to taste and have a sweetish aroma. The sun dried peels can be stored in air tight containers for years together.

Kokum is used as a souring agent in many cuisines. This fruit grows in Goa and Konkan region during the summer and people make kokum drinks out of the peel.

Apart from being good for digestion, kokum peel has numerous health benefits. Kokum has high concentration of anthocyanins, which is a great antioxidant, that also works as an anti-carcinogenic and anti-aging agent. Kokum also has cooling, cleansing and digestive properties. This explains the reason for it to be served after every meal. Kokum kadhi is a real saver during hot Indian summers as kokum has cooling effects on your body.

Bored of curries and rasam’s for lunch, dinner? Then make this delicious curry to enjoy your bowl of rice. Solkadhi are made in many ways. Here’s a recipe that most Konkana’s follow.

P.S: You can try making solkadhi (kokum kadhi) using carton/store bought coconut milk for sake of ease & for a quick drink. Though I recommend you to make some coconut milk super quick at home to avoid the preservatives used in packed coconut milk.