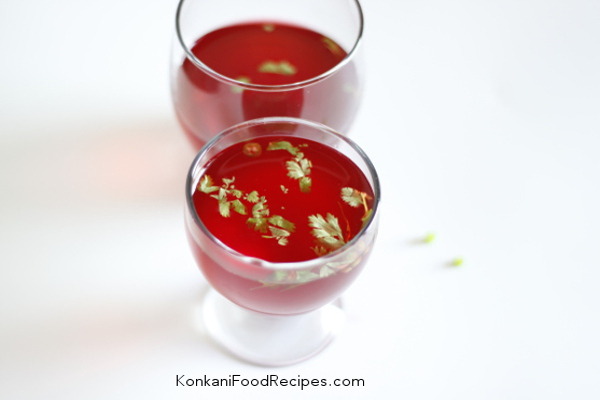 The famous Goan kokum solkadhi is made two ways. Using coconut milk and without using coconut milk. They are both served as an appetizer or are served as a drink at the end of every Goan meal. These kokum kadhi's are also had with rice as a curry.

Kokum solkadhi made without coconut milk is also known as futi kadhi. An amazing drink that’s spicy, tangy, sweet, with an amazing freshness from fresh coriander. This spicy kokum drink is an excellent thirst quencher, one of the best drinks for hot Indian summers. It is refreshing, cooling and has an amazing cooling effects on your body. That way it helps you beat the stubborn summer heat.

Kokum khadi also has amazing health benefits due to high amounts of anti-oxidants present in kokum, which acts as an anti-aging, anti-carcinogenic agent. This kokum juice also has cleansing and digestive properties. The digestive properties this juice has, explains the reason why it is had at the end of every meal. So, plenty of reasons to make this delicious kokum drink. :-)

2. If you love experimenting, then try out this variation to the spicy kokum drink. Instead of asafoetida use cumin seeds in the above recipe. Grind cumin seeds and green chillies in a mixer, add it to kokum kadhi. Then strain the kokum kadhi before serving it.