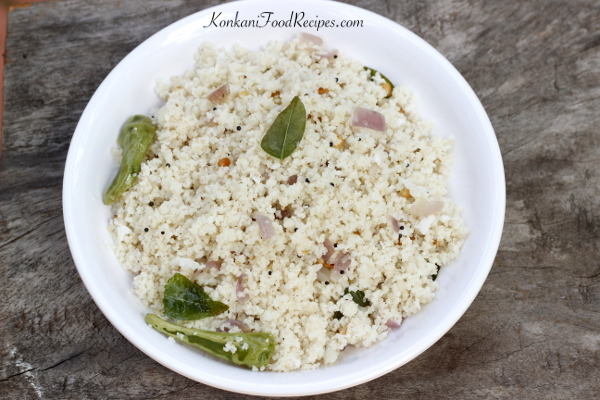 Idli usli/idli phaan is a yummy alternative to the boring idli. Idli upma is prepared by powdering/crumbling the idlis with hands and then seasoning it to make a yummy snack. The flavourful seasoning adds great taste to this dish. This spicy, seasoned, powdered idli dish is called as idli usli or idli phaan in Konkani. This idli upma is prepared for breakfast or as a tea time snack. And at home idli upma is usually prepared when there's a batch of leftover idli's that need to be emptied.

Just 2-3 idlis will make lots of idli phaan so add idlis accordingly. Also, idli upma has the best texture when made out of idli's that are steamed a few hours before. The freshly steamed idli's may not give the dry, powdered idli texture.

1. Crumble the idlis with hand into a fine powder such that all the idli rava separates well. Make sure there are no clumps. That's when each bit of it takes up the flavour of the seasoning and tastes yummy. The clumps on other hand, if there are any, remain tasteless.

2. Peel and slice the onion as thinly as possible and keep them aside.

You can even finely chop the onion.

4. Once the mustard seeds starts to splutter, add in urad dal, slit green chillies, dried red chilli broken into pieces and fry them until the urad dal starts to brown.

5. Add in curry leaves and asafoetida powder. Let them sizzle for a few seconds.

6. Now add in the sliced/finely chopped onion, little salt to fasten its cooking process. Saute on medium flame until it becomes translucent and starts to brown.

However, onion is optional and idli usli tastes awesome even without it.

10. Remove off heat and serve hot.