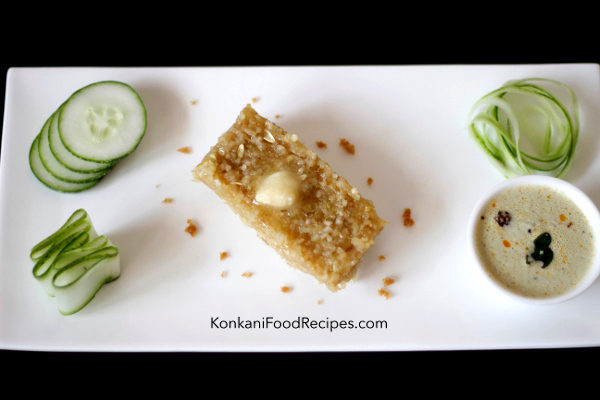 One of my favourite breakfast that's just delicious. It's yum with just ghee on top or with a spicy coconut chutney.

Making rice rava: You can use store bought rice rava but home made rava is better for texture thus better tasting idlis.

1. Wash rice, strain out all the water.

4. Open the lid and check if the excess moisture is absorbed by the rice grains and they're just cold enough, not wet any more.

If you have drained all the water out completely, 1 - 1.5 hours is all it takes.

5. If still wet, leave them closed for another hour.

6. Once you have an almost dry vessel, but rice grains that feel cold but are not wet any more, powder them in a mixer.

If rice grains dry out completely and you powder them you'll have bigger sized rice rava. If they feel cold, but aren't wet any more, then they give you smaller sized rice rava that make perfect idlis.

7. Powder rice grains until you have tiny sized rice rava, not powder of rice. Make sure you get as tiny sized rava as you can get by blitzing in pulses. They'll then cook faster and easily.

P.S: You can alternatively dry washed rice on a cloth by spreading it all around. Even in that case powder in mixer when rice grains feel cold but are not wet any more.

In that case too if rice grains dry out completely and you powder them you'll have bigger sized rice rava. If they feel cold, but aren't wet any more, then they give you smaller sized rice rava that make perfect idlis. 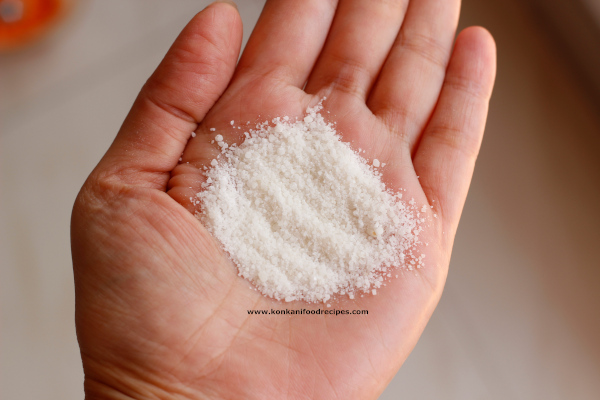 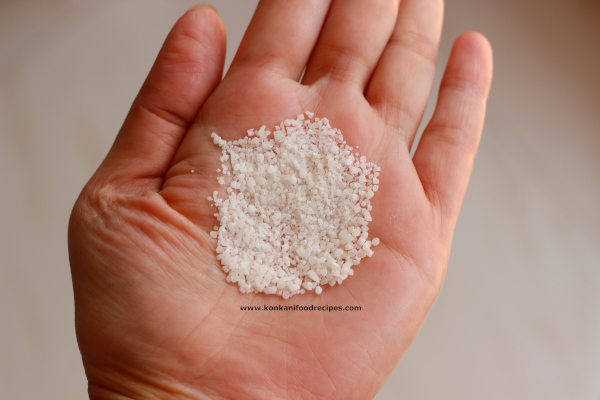 1. First peel, grate cucumbers, mix it well with rice rava you made to let the rava soak well. Let it sit in the bowl while you do rest of the prep.

Coconut adds taste and softness to the idlis.

3. Wash beaten rice (poha) with water once to get it soft and mix it well with the mixture. Beaten rice makes the idlis soft.

If you're rice rava size is little larger let it soak for longer.

5. Get the steamer going. Then to the mixture add salt for taste + jaggery according to how sweet you would like. Mix well.

Important: Add salt and jaggery at the very end as the veggies otherwise give out excess water. We don't want excess water because then you'll have rice rava that settles down at the bottom of the idlis, water stays at the top & the texture of idlis won't be right. Just enough water to cook rice rava is what we need.

The more jaggery you add more water is given out. So add jaggery at the very last.

6. Add the mixture into idli moulds or cups, or idli plates.

7. Don't press the mixture flat using a spoon, rcie rava then settles down, water stays on top. Texture of idlis then won't be right.

We want water in between rice rava all around so that they get enough water uniformly and cook through. And there's no settling.

You can cut across the top of the mixture in an idli cup/plate/mould using a spoon so that the water is all around uniformly.

9. Enjoy streaming hot with a spicy coconut chutney or with ghee on top.

They're super soft while they're steaming hot, slightly harden on cooling down.

1. If size of rava you made is bigger, steam for 40-45 minutes, let rava soak in cucumber water for 20-30 minutes longer before you steam it.

2. The amount of water cucumber gives out is usually enough to steam the idlis in, you get a slightly watery mixture. If not do add 3-4 tablespoons of water to the mixture, mix well and then steam the mixture.

3. My aunts do make these idlis without beaten rice. Just rice + cucumber + grated coconut + salt + jaggery. Turns out fine too.

4. To make the savoury version of thoushe idli refer to this recipe.

Muddo means lump in Konkani. :-) When you steam these idlis in banana leaves you usually get a delicious, flavourful lump.

1. Wash banana leaves and cut them into pieces like these below. Chop off the leaf from the hard middle ridge of banana leaf (dhandaro in Konkani).

Not tiny nor too big pieces of banana leaves we need. 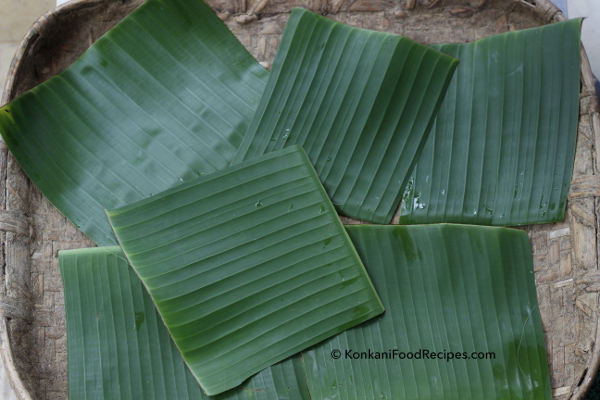 2. Hold the pieces over an open gas flame for a few seconds to wilt them a little so that they don't break on folding, Wilting makes crisp leaves soft.

3. Let them cool down for a minute.

4. Place the cucumber mixture you made in the banana leaf and roll the leaf around or just fold the 2 ends.

5. Place them one by one on top of each other inside a rolling hot steamer.

First get the steamer going and then place the mixture inside banana leaves & directly place them inside the rolling steamer or else the water from the idli mixture will start to come out from the banana leaf.

6. Steam for 30 minutes if you have thin muddo, just enough mixture in each banana leaf.

7. Steam for 40-45 minutes if you have a little more mixture in each banana leaf to make a thick muddo.

8. Enjoy streaming hot with a spicy coconut chutney or with just ghee on top.

9. These muddos steamed in banana leaves taste great on cooling down too.

Try out other veggie idlis: