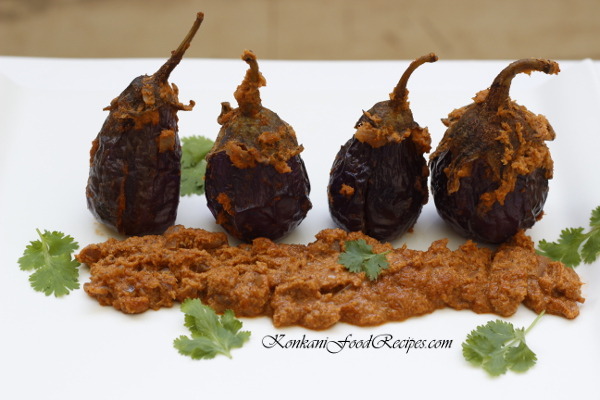 Brinjal is called badanekai in Kannada. Something fried/cooked slowly in excess oil is called yenagai. Yengai has nicely cooked, soft brinjals with a very flavourful masala. The well cooked brinjals, in the yummy masala are an absolute pleasure to eat!

Yengai is popularly eaten with a North Karnataka style Indian bread called Jolada Rotti, a flat bread made of corn flour or with Akki Rotti, a flatbread made of rice flour. Yennegai can also be had with chapathis or hot steaming rice!!

I always saw these beautiful aubergines, called as vaygan in konkani, in the market. Didn't know how to use them as we don't find them in Udupi, Mangalore region. So, didn't know any recipe that entails these cute, yummy eggplants. My hubby's aunt who lives in Hubli happened to visit us and she prepared this amazing badanekai yennegai with these brinjals. Ever since then its been showing up in my kitchen every now and then. I have totally fallen in love with these brinjals/eggplants and with this yummy dish. 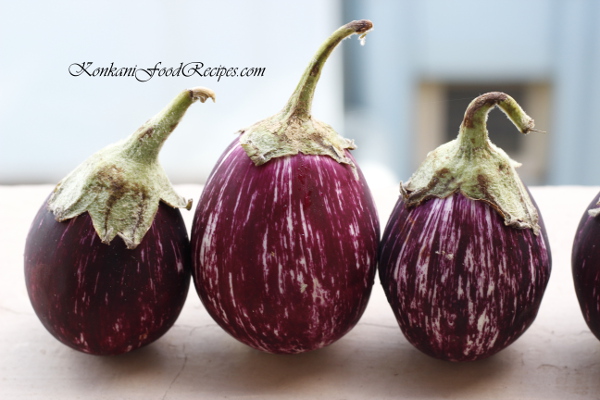 Yengai is almost similar to our konkani style stuffed brinjals (gulla sagle). Yengai is spelled in different ways(Ennegai/Engai/Yennegayi/Yennegai/Yenagai/Ennegayi/Engayi) and this dish has multiple versions of the recipe too!! I got this version of the recipe from my hubby's aunt and I bet it makes awesome yengai!!

1. Use tender stripped/unstripped purple brinjals for this recipe. Wash them well and do not remove the stem.

2. Take each brinjal & make 2 slits starting from the bottom, almost till the stem, so that the stem portion holds the brinjal whole and intact even after cooking.

Yengai has whole brinjals infused with the masala. So, make sure you don't cut the brinjal into pieces. The cuts should look like a cross in the picture below. 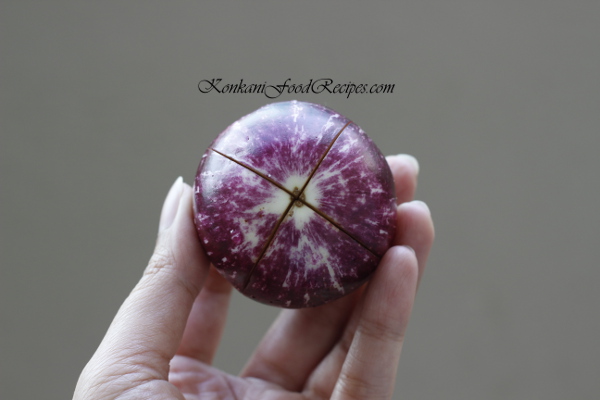 3. Add the slit brinjals into a vessel with water to prevent oxidization(browning of the brinjal) and this step also helps remove bitterness from the brinjal (callled as chogru in konkani/kannada).

Keep the brinjals dipped in water until you have the masala ready.

1. Roughly chop half an onion, heat a tablespoon of oil in a tadka pan and fry the onions until they become translucent. 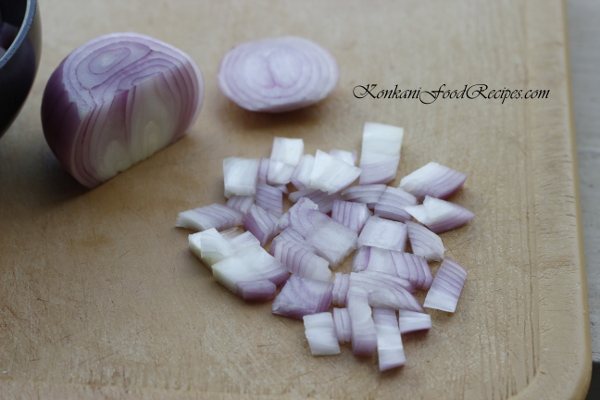 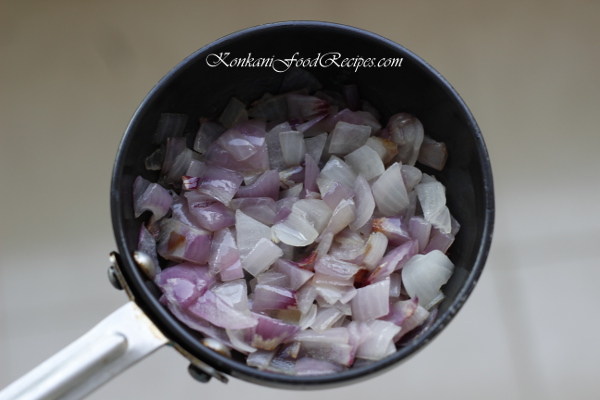 2. Once the fried onions cool off, grind them with peeled garlic, grated coconut, red chilli powder, garam masala, tamarind and salt into a coarse paste using just enough water for grinding. We need a dry paste to stuff the brinjals.

Back to the brinjals:

4. Remove the brinjals out of the water, stuff the brinjal with the freshly ground paste. Squeeze in masala in between the slits.

5. Keep aside the excess ground masala for use later on.

6. Heat remaining oil in a deep bottomed wok, when the oil's hot, add in the remaining  roughly chopped onions and sauté them until they turn translucent.

You can also add a pinch of salt to the onions to fasten their cooking.

7. Once the onions are translucent, transfer the stuffed brinjals into the wok and also add in all the leftover masala.

8. Add in finely chopped fresh coriander, add about 1/2 cup water. We want the brinjals to almost dip in the masala, water mixture so that they cook well.

Water added should be propionate to the masala added and it should be just enough to cook the brinjals. We need a thick yengai in the end so be careful as to not add excess water. 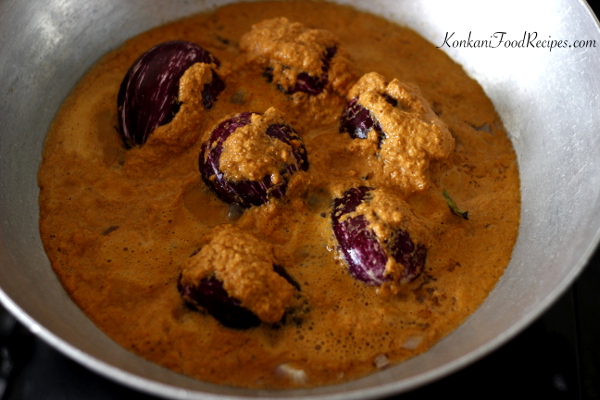 9. Set the heat to medium, cover with a lid and cook closed until the curry gets nice and thick in consistency and the brinjals are cooked through.

10. Keep a look out while cooking, the yengai could start sticking to the bottom of the pan once all the water evaporates and start to burn once it dries out. So, add in water little by little if required in between.

11. For even cooking of the brinjals, toss them around for every few couple of minutes.

Do try out the recipe and let me know how delicious it turned out. You could even connect with me on Twitter, by doing so you could tweet any queries, suggestions you have about any of the recipes and I would be glad to help you sort things out!