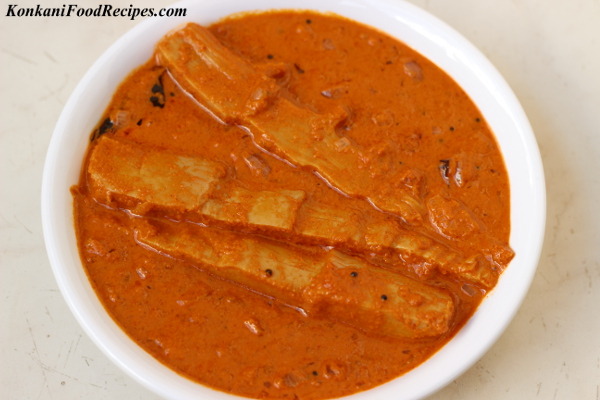 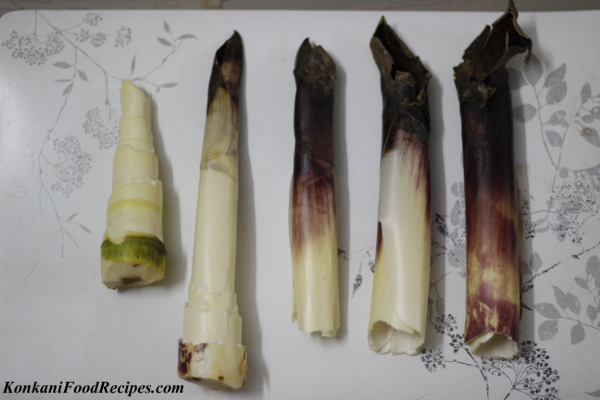 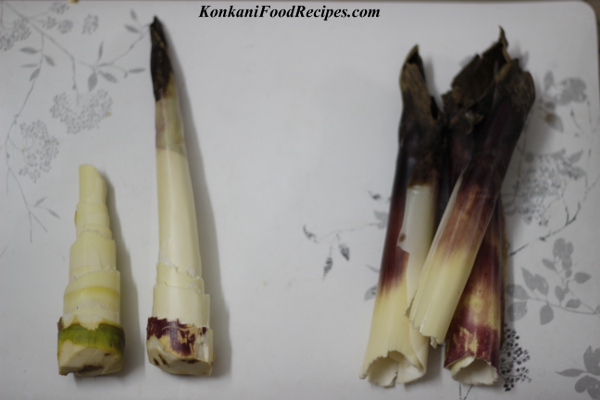 Slit the inner cores into two. These are ready to be used. 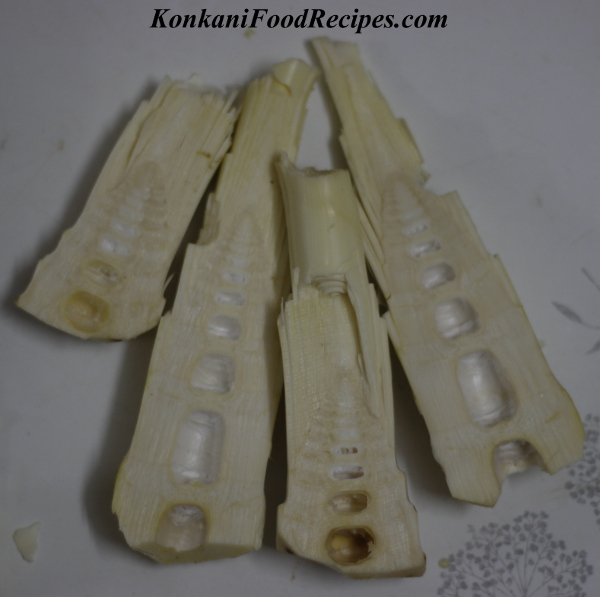 The tips of tender bamboo shoots, called suyi in Konkani: 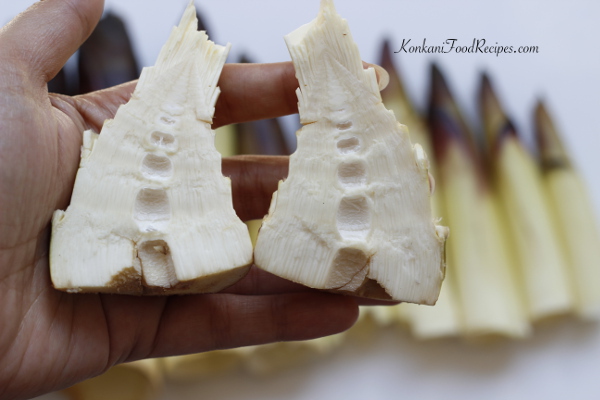 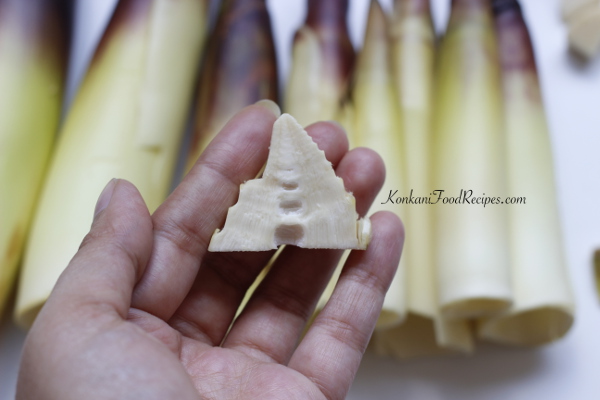 These inner hard cores are further cut into pieces and used in cooking.

Some people who taste fresh, cooked bamboo shoots for the first time may feel some unpleasant taste/smell. But proper handling before use, ie, washing and proper cooking removes the so called unpleasant taste. 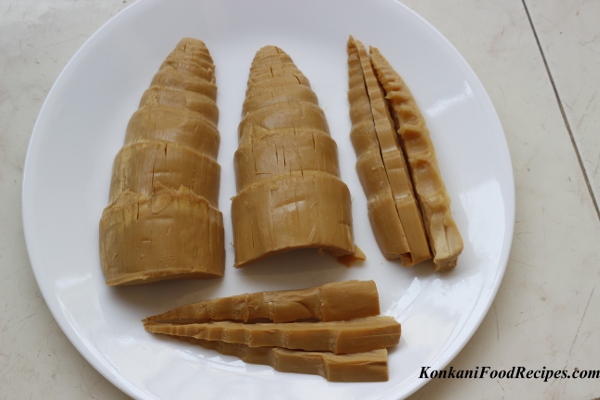 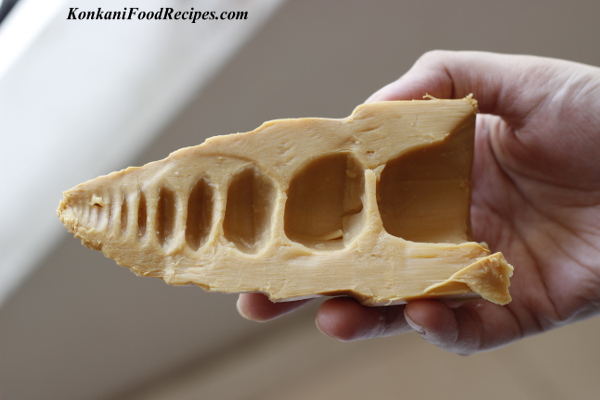 The outer layers of fresh, tender bamboo shoots are peeled as shown in pictures above.

The dry inner cores slit into two are added into a clean, dry air tight bottle/container along with a handful of rock salt, mixed and kept aside. This step helps the bamboo shoots take up salt and get pickled.

As time passes by, the salt dissolves and as the bamboo shoots take up salt they give out water and you have bamboo shoots floating in brine (salted water).

This way the pickled bamboo shoots can be preserved for not only months but for years together.

Over time the pickled bamboo shoots look like this: 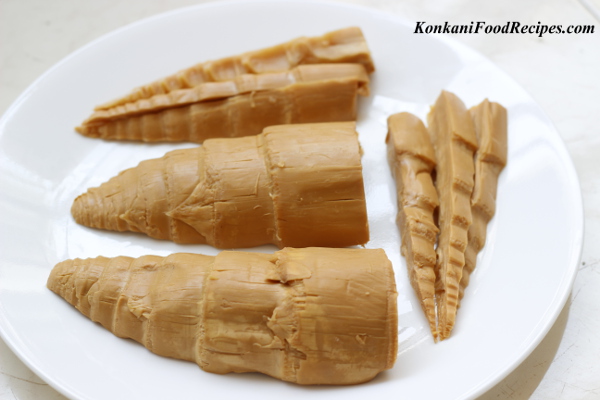 Take out the pickled tender bamboo shoots out of the brine and prick them nicely all over with a knife so that they take up the all the flavours of the curry later when cooked in it.

Make them into thin or thick slices depending on how you like to eat them. 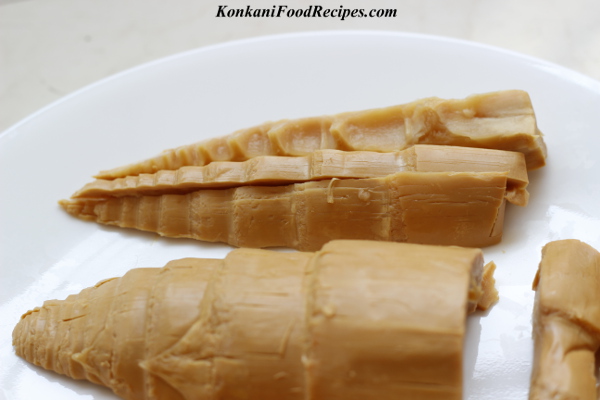 Add the slices into a vessel with bowling water and boil for 4-5 minutes, on a medium flame with the lid on. This process helps get rid of the yukky smell of bamboo, gets rid of the excess salt that the bamboo has absorbed and also cooks the bamboo shoots.

You could cook the bamboo shoots directly in the curry but I would advice cooking the bamboo shoots in water first and then discard the water the shoots have been cooked in (don't even use it in the curry) as it he spoils the taste of the curry later on with the stink and weird taste of bamboo. The cooked bamboo would be just right in terms of its taste, smell and the amount of saltiness it has.

The bamboo shoots even on pickling don't cook fully, they still have that crunch when you bite into them and thats how it should be. That's what makes eating bamboo a pleasure! Only if the bamboo has been pickled for more than 2 years, then the bamboo shoots must have gotten soft and lost that crunchiness they have.

Heat a tablespoon of oil in a tadka pan, add in the fenugreek seeds, corrainder seeds and red chillies broken into pieces. You could also dry roast the spices for few minutes until you get the anice roma of fried fenugreek, coriander seeds and the red chillies. Remove off heat and keep it aside to cool to room temperature.

Once it cools down grind it along with grated coconut and tamarind into a smooth paste. Keep this ground masala aside.

Finely chop the onions and fry them using oil in a frying pan until they get translucent.

Add the cooked bamboo shoot slices and the ground masala to it and mix well.

Add enough water to bring the curry to the desired consistency, take care that the curry isn't too thick or too watery.

Bring the curry to boil. Simmer for a few minutes until the rawness of the masala goes off and remove off heat.

Taste in the end and add salt if required. Any salt that's left out in the bamboo shoot slices would have got into the curry hence, add salt only if required.

Heat oil in a tadka pan, add mustard seeds and when they start to splutter add in curry leaves and fry them for few seconds.

Add this tempering to the curry and mix well. 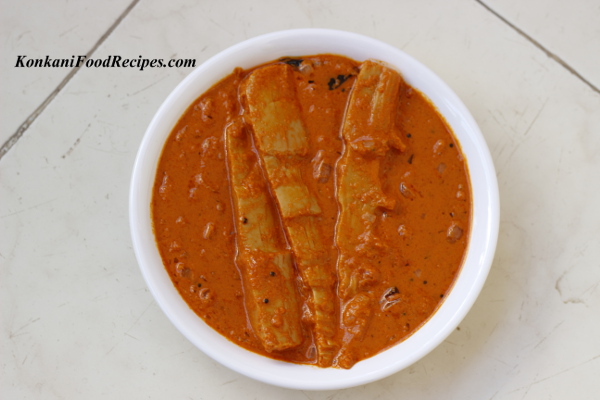