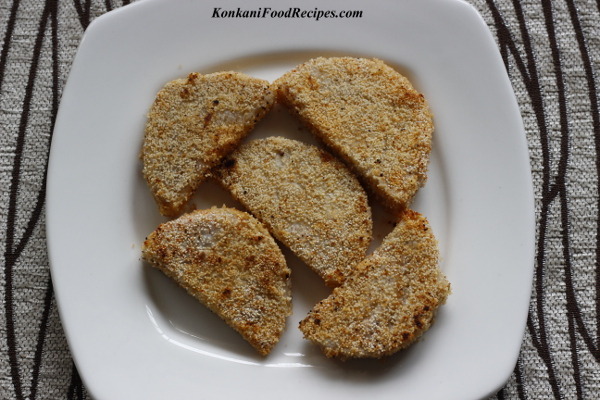 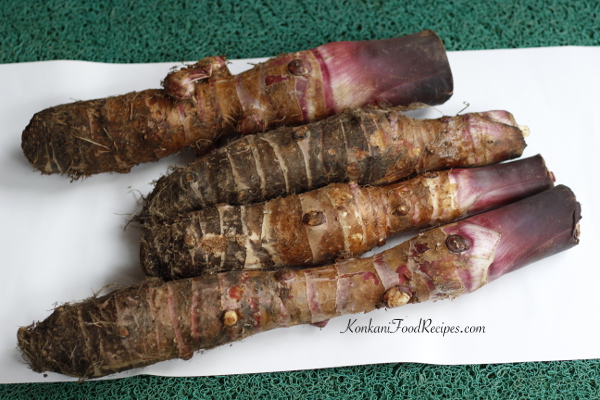 In Konkani cuisine we also make a variety of delicious, spicy, side dishes using colocasia tubers. In Konkani they are called bon (maddi sukke), maddi koot, tambut (pickle) and maddi sasam. The tip of colocasia tuber is made into a stir fry (maddi venteche upkari). Colocasia tuber chips are sold in shops. And the most popular Konkani dishes are shallow fried and deep fried colocasia tubers called as maaddi phodi or kaale alva maddi phodi.

Here's the recipe to prepare yummy, shallow fried phodis of colocasia tuber, called as maaddi phodi in Konkani. The tubers are coated with spiced semolina and then shallow fried in oil.

Or you can chop them into slices & then chop off the peel using a knife.

Size and shape of the pieces is a personal choice. Any size, any shape, any thickness will do. Preferably keep them a little thick so that you get a mouthful with every bite. 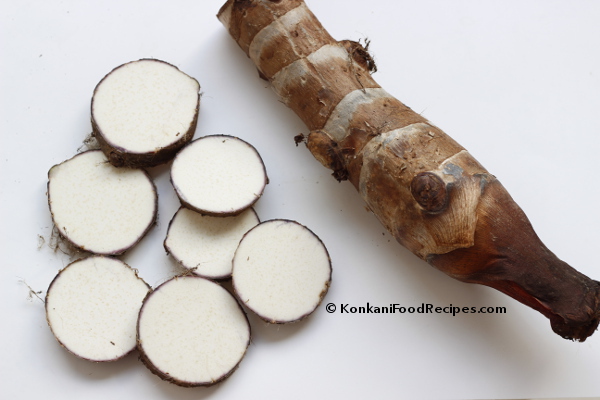 You don't want to experience the itching! I wish somebody had told me these things the first time I handled the tuber/maaddi.

2. Pressure cook the colocasia slices with salt and 1 cup water. Make sure you put off the pressure cooker before the whistle blows or else they overcook.

3. Strain the water. Once the slices cool down, shallow fry them with spiced semolina on a pan. 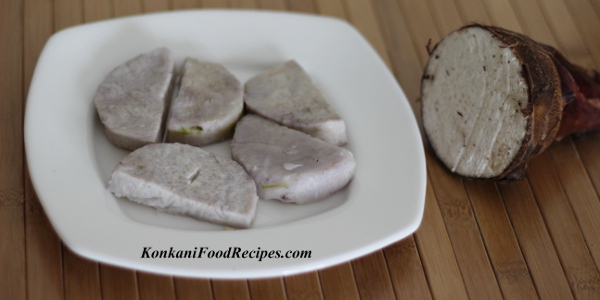 4. In a bowl, add semolina, salt, red chilli powder and mix well. Add the cooked tuber/maadi slices into the bowl one and by one and coat them well with the semolina mixture by gently moving them around in the bowl.

5. Heat up a frying pan, set it on a medium flame. Keep the slices of colocasia tuber/maaddi coated with semolina on the frying pan.

7. When the slices are fried on one side, turn them upside down. Add more oil and fry them on the other side too.

8. Fry them on both sides until golden brown, crisp on the outside, soft on the inside.

9. Serve them hot as a side dish/starter for lunch, dinner.